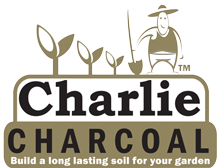 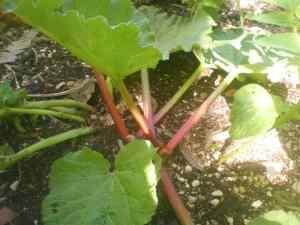 If you have never grown rhubarb, think about giving it a go.  We have found it to be reasonably easy to grow, if you provide its ideal growing conditions!  It is originally native to Siberia and parts of the Himalayas – so it needs some care in our dry, Mediterranean climate.

Rhubarb likes enriched soil (feed it up with compost and poo) and keep it well mulched over summer.  It will wilt and show you it needs a drink in the warmer months.  We have found ours grows best in almost full shade – it certainly can’t cope with full summer sun.  Rhubarb will grow well in a large pot, and you can then move it around to suit the seasons.

Rhubarb is available in seedling form for a large part of the year, and as crowns in winter.  Crowns are divided sections of a mature plant, lifted from the ground.  The advantage of growing them this way is they are then able to be harvested much quicker than seedlings, which can take several years to reach maturity, and immature plants are more vulnerable in their early growth stage.  (This picture is a seedling in our garden in its second year.  Stems are about as thick as your thumb, and only 25cm long approx.)

If you plant a crown section, it is still recommended not to harvest during the first year, just to enable the plant to really establish itself and be robust for future seasons.  (Although surely one or two stems might not hurt!...)  Rhubarb plants can grow for up to 15 years, so it pays to look after them!  They do flower and set seed – although I have never seen this.  Apparently it is more common on older plants (4 years+), and flowering is triggered by cold winters.   Some people recommend removing flower heads to promote more vigorous stem growth.  Others like the spectacle.  If you are planting several crowns, allow at least 80cms between each plant – they will eventually grow quite large, with leaf stems growing up to 75cms long.  Plant so the crown (where there should be signs of new shoots emerging) is just at ground level.  Don’t bury too deep.

Rhubarb roots and leaves are both poisonous, so never eat these portions of the plant.  In fact, rhubarb leaves can be made into a homemade insect spray, suitable for aphids and other sap sucking insects.  Boil leaves (at a ratio of about 1:10) with water, and add about half a cup full of pure soap flakes.  Allow to cool, and strain.  Use immediately – it doesn’t store well.

Most varieties available here seem to be greener stemmed rather than deep red in colour.  From what I have been able to research this is due to (a) green stemmed varieties being more prolific growers, and thus easier for commercial propagation/cultivation, and (b) flavour.  Apparently darker red stems = more tartness.  People have told me age of the plant and the amount of sun it’s grown in also can affect colouration – I’d love to hear any other theories that may be out there!??   Personally, I grow it for that intense flavour, whatever the colour!  (I know of a lady who adds (natural) red food colouring to hers when she cooks it!)  There is certainly nothing “wrong” with green rhubarb stems, and they are not unripe – a common misconception.

When picking rhubarb stems, break them away downwards.  Remove them carefully so as not to damage the crown  Don’t cut the stems as this causes rot, and you can lose the whole plant.  (I have proved this from unfortunate personal experience!)

Reasonably hardy (providing they are situated well in good soil) – they can handle frosts, and are fairly disease resistant, although some fungal problems eg. Downy mildew (usually due to damp conditions and poor airflow) can occur.  Snails and slugs can also damage stems.


< Back to Growing Organic Veggies & Herbs